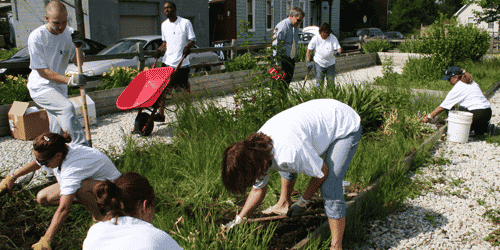 Life Directions was born out of the issue of violence. In 1973, Detroit was called the “Murder Capital” of the United States. On average one young adult was dying every twelve hours. The founders of Life Directions — Rev. John Phelps, C.Ss.R., Rev. Alex Steinmiller, C.P., Sister Rosalie Esquerra, O.P., and Alex and Judith MacDonald arrived at the intuitive understanding that it was necessary to “get to the cause of the violence.” The dynamic of “Peers Inspiring Peers through Forgiving” was forged through a series of neighborhood discussions directed at determining its root causes with people who were experiencing its effects.

Life Directions first response was to design the Focus Life Weekend for training and developing young adult peer leaders. The process centered on engaging the values that give direction to actions through forgiveness. The young adult leaders then entered into three public arenas — Neighborhoods, Public High Schools, and Churches — to awaken peers to be a part of the solution to the violence of their peers.

Life Directions efforts, in Detroit, through continuous improvement, were formed into the three interconnected programs that exist today — the Neighborhood Enrichment Program, the Peer Motivation Program, and the Peer Mentor Program. As Life Directions discoveries were refined it prepared to expand its work.

Life Directions exported its work to Chicago, New Orleans, San Antonio, Tucson, and Marion County, OR. To date over 130,000 young adults, ages 13-35 have partnered with Life Directions to inspire their peers to embrace the values and virtues that make life grow.

Life Directions celebrates its 40th anniversary of reaching those most at risk in Detroit, MI and Chicago, IL.