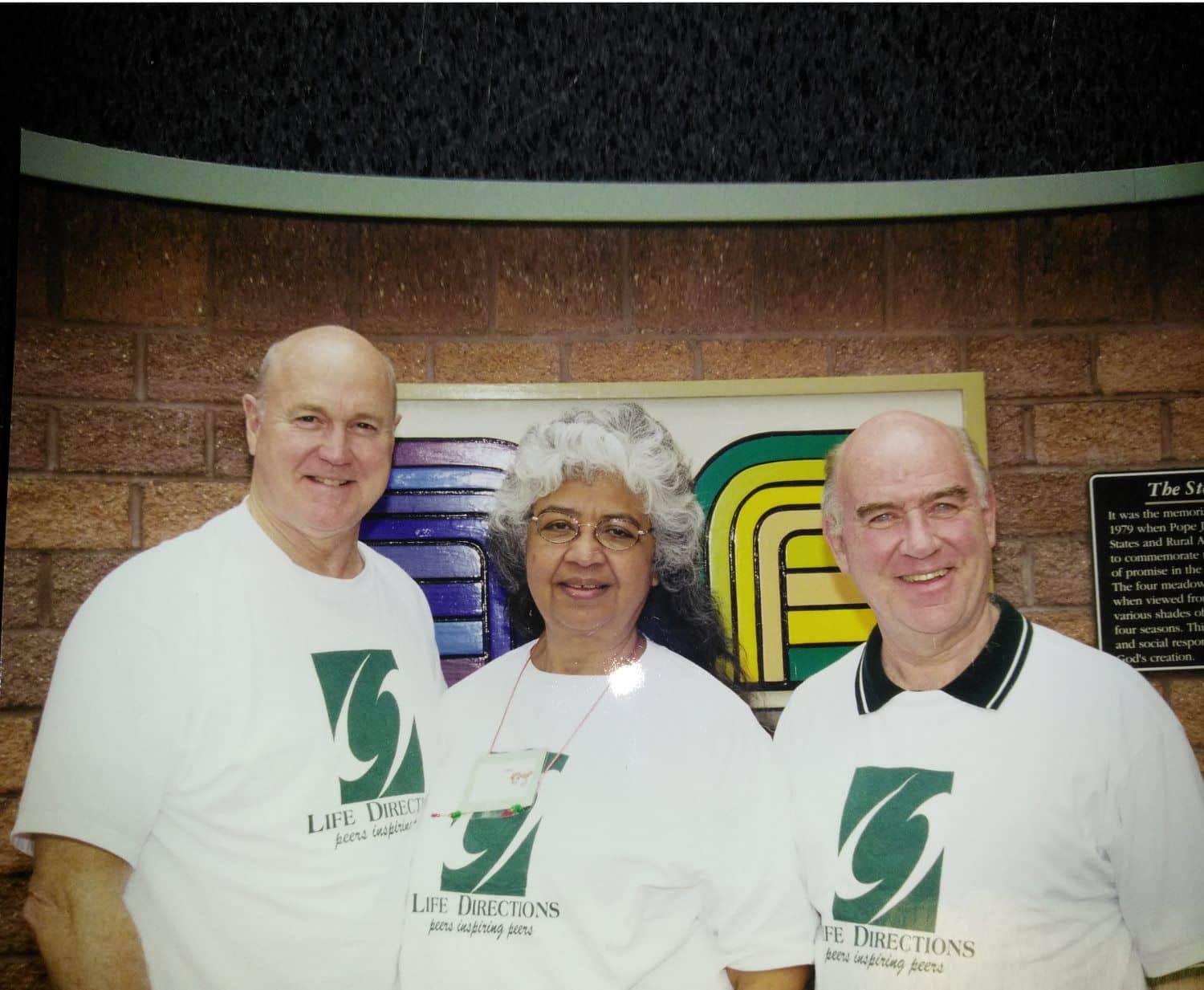 Father John Phelps is the President and C.E.O. of Life Directions, which he co-founded in 1973 with four other concerned Detroit citizens, Fr. Alex Steinmiller, CP; Sister Rosalie Esquerra, OP; Alexander & Judith MacDonald. He is a Roman Catholic Priest, ordained in 1968, and belonging to a religious community of men called the Redemptorist Congregation. Fr. Phelps’ primary work is among young adults (13-35 years of age), with a priority on those on the verge of dropping out of school and into self-destructive life choices. He is especially focused on those who come from families below or near the poverty line.

Among his many academic achievements, Fr. Phelps holds a Bachelor’s of Philosophy Degree with a minor in Psychology, Master of Arts Degree in Religious Education and a Master of Divinity Degree. In 1999, he completed a four-day Executive Training course offered by the Gallup Organization in Lincoln NE.

From 2005-to-2007, Fr. Phelps served as pastor of St. Alphonsus “Rock” Church in St. Louis, MO and President of Nativity-Miguel Middle School in St. Louis, serving 350 pre-school to 8th grade students. In 2009, he returned to Life Directions as full-time CEO.

Fr. Phelps is a renowned preacher and lecturer. He has led hundreds of workshops in cities, colleges, and universities throughout the United States and abroad. In1990, Fr. Phelps was invited to bring Life Directions to Chicago. In partnership with the co-founders, in 1993, he established Life Directions USA as a not for profit organization incorporated in the State of Illinois and doing business in 4 additional states.

Additionally, his work had led him to be highly sought after as a consultant on issues concerning at-risk youth. He has served with many various ecumenical organizations, church groups, corporations and educational institutions that are striving to place a priority on developing inclusive partnerships among people of diverse backgrounds and economic differences.

With Fr. Phelps’ leadership, Life Directions has been working for almost 50 years to promote the powerful dynamic of Peers Inspiring Peers Through Forgiving.

Fr. Alex Steinmiller is a Catholic priest and belongs to a community of missionaries known as the Passionists, which works with the poor and marginated in 58 countries.

The Passionists have been located in Ensley, Alabama at Holy Family Parish and schools since 1936. They built the Holy Family Community Hospital which accommodated black families and hired black doctors and nurses during segregation days. The parish has a middle school.

Fr. Steinmiller is the president of Holy Family Cristo Rey Catholic High School. The school includes 171 students from families who cannot afford a college preparatory education. Every student works their way through high school in the Corporate Internship Program. In this program students contribute to their tuition by holding a once-a-week, entry level, corporate job. The school is in its fifth year of operation. While the school boasts that 100 percent of all grads are accepted into college, the first full four year class of graduates has 87 percent of the students still attending college.

Fr. Steinmiller spent 30 years developing programs with at-risk young adults, 13 – 30 years of age in Detroit and San Antonio. He co-founded Life Directions, which continues into its 40th year of work in Chicago and Detroit.

He holds a Master’s Degree in Divinity from the Catholic Theological Union at Chicago. He has done extensive work in the area of breaking the cycle of poverty, non-violence and male spirituality.

As a Director of Life Directions, Sister Rosalie Esquerra has co-designed and implemented Focus LIFE Volunteer Training and Development and three other programs: Peer Mentor, Peer Motivation, and Neighborhood Enrichment. She has co-authored manuals and workbooks for staff and volunteers from multi-cultural and bi-lingual perspective. Additionally, in 2001, she became the Director of the National Training Center for Life Directions.

Born in Kingman, Arizona, Sister Rosalie (as she is affectionately known) has been a member of the Adrian Dominican Sisters since 1955. She holds a Master’s degree in Education; a Bachelor’s in Philosophy and has been certified as a conflict mediator, youth and parent effectiveness instructor and as a third-party conflict manager.

As a teacher and principal, from 1957-1974, Sister Rosalie created a positive and supportive climate for learning. She holds specific interest in children in need of special attention; academic, emotional, and spiritual. As a coordinator of the Title VII project (1974-1976- LASED Detroit), she directed a team responsible to ready parents to advocate for their children for Bi-lingual education in midst of desegregation crisis. Impact accomplished needed changes with parent-involvement that continues in southwest Detroit.

Sister Rosalie, a Mexican-American, is bi-lingual with the abilities to read, write and speak Spanish and English. In 1974, she was involved with Hispanics as a partner in Archdiocese of Detroit’s creation of First Hispanic Office. She has given numerous workshops in Spanish on Communication skills, Assertiveness, Conflict Management, Cultural awareness. She has also led retreats and Parish Missions in Spanish. In 1995, she initiated Life Directions within the Native American Community of Arizona.

Among her numerous recognitions, Sister Rosalie is the recipient of the “Citizenship Award” from Detroit Public Schools for her outstanding contributions to children, schools and community (1974). She has received numerous other recognition’s, proclamations and special tributes for her educational and community service.

Alexander and Judith MacDonald, have eight children, and 20 grandchildren, and two great grandchildren. Alexander was born in Nova Scotia; he came to the United States when he was ten years old. He graduated from Holy Redeemer High School and served in the US Army Reserve for 6 years. Alexander MacDonald worked at Harper Hospital as and OR technician, working on some of Dr. Forest Dewey Dodrill’s heart cases. Dr. Dodrill was a famous open heart surgeon; Alexander attended Sacred Heart Seminary for five years and received a certificate in Pastoral Ministry. In 1965 Alexander went to work for Chrysler, and attended the Chrysler institute; attaining certifications in the following studies: Professionalism in Management, Public Speaking, “Rubenstein’s Problem Solving”, and Professionalism in Management Phase II. Alexander retired in 2000. In the formative years of Life Directions, he helped build the leadership of adults to work with young adults and conducted groups of young adults with the focus on Peers inspiring Peers to forgive. Judith and Alexander co-chaired the Archdiocesan Endowment Campaign for “Stewards for Tomorrow” in their parish. Alexander passed away in September, 2013. Judith MacDonald, graduated from Holy Redeemer High School and McAuley School of Practical Nursing; she continued her education at Schoolcraft College and Sacred Heart Seminary. She served in various capacities in Life Directions, as administrator, manager of personnel, finances marketing and public relations. Judith conducted groups for leadership / among adults, and young adults in the neighborhoods. She served as Life Directions’ focus Life first chairperson of the Board of Trustees and on Our Lady of Mercy High School’s first Board of Trustees. Judith also held a corporate member position in Life Directions, and serving as the Vice President of Mission Effectiveness, Judith was a member of several parish councils. Retiring from Detroit Receiving Hospital, Trauma Center, where she worked as a MLPN, Medicine License Practical Nurse. Judith passed away August of 2014.